Book Review: The Next Flame by Penelope Douglas 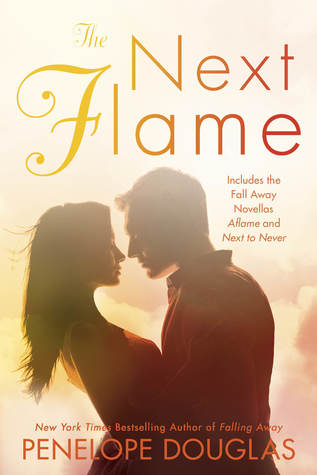 Next to Never Under the close watch of the men in her family, Quinn Caruthers has found it nearly impossible to spread her wings—or even date—without her three older brothers, Jared, Madoc, and Jaxon, jumping in to hover. And when a family friend—several years older—from her childhood still holds her heart, she knows they’re going to be a problem. Lucas Morrow is a man, and knowing her brothers, he may as well be forbidden.But years ago, Lucas left town and shows no signs of returning. Quinn knows she shouldn’t wait for him anymore. Until a package turns up on her doorstep with no return address and its contents reveal family secrets that threaten to turn her world upside down. She’s never asked about the path of her parents’ romantic history, but she soon learns their happy marriage had a very rocky and passionate start. As she starts to see things around her with new eyes, Quinn will have to make tough choices about whether she’ll keep waiting…or finally go after what she really wants.Aflame Tatum Brandt finally has everything she wants. Acceptance to medical school, a circle of friends she would never replace, and contentment that every day is now hers.All through high school, Jared Trent called the shots. He decided if she would be happy or sad, fearful or free. He owned her heart, and he played with it like one of his cars. Never again.Two years ago, Jared left town, and Tate’s life is exactly where she wants it to be. Or that’s what she tells herself…Because two years ago, her heart also stopped beating, and no matter the success in school or the support of her friends, there’s only one time every week she can feel that same rush in her blood. Friday nights on the track. That’s hers, not his, and to hell with anyone that gets in her way again.Especially him.*Please note: The Next Flame is not a new story. It is Aflame and Next to Never together in one book. For those readers who desired paperbacks of Aflame to complete their collections, this is it. **Also Note: Next to Never is not Quinn's story. That will be a full length novel eventually. This is simply a novella to catch up with all the characters and give a lead-in to the coming spin-off series.

MY BABIES. Tate and Jared are definitely my favorite couple of the Fall Away series and they hold a special place in my heart. The fact that Jared LEAVES and comes back after TWO YEARS to win Tate back had me freaking out. Why couldn't my babies have just been happy? This book holds two novellas in the Fall Away series, but since I have read Next to Never separately and already reviewed that story, I am only going to be talking about Aflame, the first story in this book. Aflame is over 260 pages, so we basically get another novel about Jared and Tate. While the two have been happy and madly in love, Jared feels like he still doesn't know who he is or who he can be in this world. He decides to leave Tate to go figure that out, but that leaves Tate heartbroken. Four years after the end of Bully, Tate has to decide if she'll let her bully win her heart-- the very heart he's broken time and again. SO MANY EMOTIONS. I was so shocked when I picked this up and realized that Tate and Jared broke up. WHYYYYYYY. But, OMG, this is like Bully all over again and I gobbled up every second of it. Tate is such a strong character, so of course she doesn't just open her arms to Jared when he returns two years after breaking her heart. I loved how Tate held her own and tried to not show how much Jared was affecting her; Jared had to work to earn her back. As always, I loved the banter and play between Jared and Tate. There is undeniable, hot chemistry between the two and I loved how it got harder and harder for Tate to resist Jared. Nothing can compare to the heat between them. We also got to see the other couples from the series and how their relationships had progressed in two years. This book only reinforced my love of the Fall Away series and has me dying for even more from them. Does it have to be over??!!? If you love the Fall Away series, then this is a must read for you. If you haven't read this series, YOU HAVE TO. This series is one of my favorite series of all time and Penelope Douglas is definitely one of my favorite authors. These books are full of angst and force you to love these broken characters and hold them close to your heart through the thick and thin.