Book Review: The Wall of Winnipeg and Me by Mariana Zapata

The Wall of Winnipeg and Me 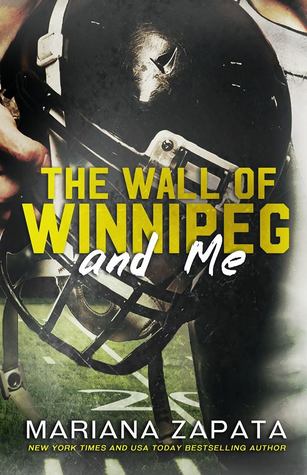 Vanessa Mazur knows she's doing the right thing. She shouldn't feel bad for quitting. Being an assistant/housekeeper/fairy godmother to the top defensive end in the National Football Organization was always supposed to be temporary. She has plans and none of them include washing extra-large underwear longer than necessary.

But when Aiden Graves shows up at her door wanting her to come back, she's beyond shocked.

For two years, the man known as The Wall of Winnipeg couldn't find it in him to tell her good morning or congratulate her on her birthday. Now? He's asking for the unthinkable.

What do you say to the man who is used to getting everything he wants?

Oh my goodness, talk about a slow burn romance! This romance was soooo slooowwwwww but it was OH SO GOOD! In the end, the slow pace only left me begging for more! Vanessa had big plans when she went to college and majored in graphic design. Those plans didn't involve acting as assistant, chef, and personal maid of Aiden Graves, aka the Wall of Winnipeg. Vanessa knows she's not going to work for the beast of a football player forever, but she's gotten into a routine with the silent and dedicated athlete. As she realizes how little Aiden cares about her as a human being, though, she decides to quit and finally become her own boss. To her surprise, Aiden shows up on her doorsteps two weeks later asking a huge favor that could save his career. Vanessa wants to say no, but finds herself agreeing to moving in with Aiden and discovering his soft side and the surprisingly caring man with a past not so different from her own. Oooooh this book. Okay, so let me start off by saying that it's over 600 pages long and definitely has a very slow start. The story began mostly inside of Vanessa's head and I was getting a little bit tired of all of her thinking over whether to quit being Aiden's assistant or not. There was literally ZERO romance in the beginning, but I found myself okay with that. Because once Vanessa moved in with Aiden after he asked her a favor, I was dying over how they slowly started to grow closer and really care for each other. Vanessa was such a fun character and I absolutely loved reading about how her life was working for someone like Aiden. She was such a caring person but still wanted to go out and make the most for herself. Her feisty attitude with Aiden was so fun and I loved their relationship where Vanessa called Aiden out on things and he fired right back. Oh, and Vanessa started to run and train for a marathon with Aiden's roommate, who was a football player who she was close friends with, which I absolutely loved! As for Aiden, he was definitely a man of few words, but I loved how he really didn't need to say much to show people what he thought of them. His actions towards Vanessa later on in the book were so sweet and I found myself falling for him myself.If you haven't yet picked up this book, YOU MUST! With a slow burn, sweet romance and characters you can't help but adore, you won't be able to put this book down. I am so excited to pick up another Mariana Zapata book! I can't wait to see what else she has to offer!