Book Review: Anatomy of a Single Girl by Daria Snadowsky 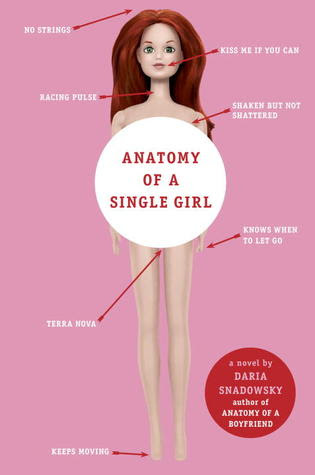 Summary: With Judy Blume-like honesty and insight, this sequel toAnatomy of a Boyfriend is about life after first love--romance, sex, friendship, family, and the ups and downs of life as a single girl.
After everything that happened—my first boyfriend, my first time, my first breakup—jumping back into the dating game seemed like the least healthy thing I could do. It’s not that I didn’t want to fall in love again, since that’s about the best feeling ever. But as a busy college premed still raw from heartbreak, which is the worst feeling ever, I figured I’d lie low for a while. Of course, as soon as I stopped looking for someone, an impossibly amazing—and devastatingly cute—guy came along, and I learned that having a new boyfriend is the quickest way to recover from losing your old one. The moment we got together, all my preconceptions about romance and sex were turned upside down. I discovered physical and emotional firsts I never knew existed. I learned to let go of my past by living in the present. It was thrilling. It was hot. It was just what the doctor ordered.But I couldn’t avoid my future forever. In Daria Snadowsky’s daring follow-up to Anatomy of a Boyfriend, eighteen-year-old Dominique explores the relationship between love and lust, and the friendships that see us through.

Review: I had a lot of fun reading Anatomy of a Boyfriend, which was about Dom's first relationship in high school and how that relationship transferred over into college. It was funny and quirky, yet had its serious and emotional moments. I was really excited to see where Dom was now and how she was fairing as a single girl in college.
After Dom's first boyfriend broke her heart, Dom has decided she doesn't need a man while she's in college. How could she when all she can think about is her first love? But when the opportunity for a summer romance comes along, Dom finds herself unable to resist. Having a relationship, though, is a lot more serious to Dom than she realized. Can she simply have a summer fling? Or does she need more? Oh Dom. How did you manage to get into seriously emotional situations? First you like a guy, then you get into a fight, then you make up, then you fight, all while some other guy is super sweet and has a thing for you. Well, I guess that's college for you. Dom goes through so many new situations when it comes to relationships and you're right there with her as she figures out life and makes decisions for the first time. While I still enjoyed Dom's personality and insecurities, it got a bit annoying with how completely obsessed with sex she became at one point. Seriously, it was all she thought about and talked about. It became a little too much for me at that moment. Other than that, though, her new experiences were all about growing up and discovering new things that every girl goes through. This time there's a lot more with Dom's best friend Amy, which I really liked. Amy actually has her first real boyfriend and now Dom has to deal with that and all of the trials Amy has with her own relationship as well. Overall, it was a pretty good read that gave us the coming of age story for college. If you were a fan of Daria's first book, then you definitely have to check out Anatomy of a Single Girl.