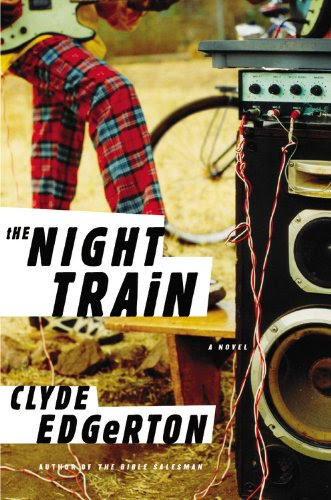 Summary: In 1963 at the age of 17, Dwayne Hallston discovers James Brown and wants to perform just like him. His band, the Amazing Rumblers, studies and rehearses Brown's Live at the Apollo album in the storage room of his father's shop in their small North Carolina town. Meanwhile, Dwayne's forbidden black friend Larry, aspiring to play piano like Thelonius Monk, apprentices to a jazz musician called the Bleeder. His mother hopes music will allow him to escape the South.

A dancing chicken and a mutual passion for music help Dwayne and Larry as they try to achieve their dreams and maintain their friendship, even while their world says both are impossible. In THE NIGHT TRAIN, Edgerton's trademark humor reminds us of our divided national history and the way music has helped bring us together.
Review: From the cover of this book, I thought it was going to be this awesome story of these two guys trying to form a band. Instead, I got some strange book that had no plot whatsoever. The Bleeder and Larry meet in the beginning of the book and the Bleeder wants to teach Larry how to play more music. From there, the book goes on to talk about random things, random scenes, and even more random people. By page 80 I had to stop because there was honestly no point to the story. Online, I read reviews where people say it's such a real book about racism in the south, but I got non of that from the book I was reading. Maybe I'm just not "deep" enough to understand this story, but if it takes deep, critical thought to even get close to the meaning of this book, then it's not the book for me. I didn't care about the characters and the lack of quotation marks when there was a conversation really bugged me. I know this review is a little harsh, but if you're looking for the next great book to read, stay far away from this one.