Fighting for Rain (The Rain Trilogy #2) 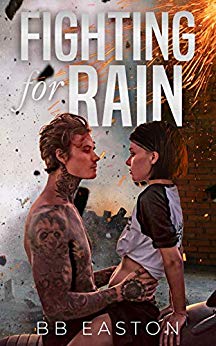 The world was supposed to end on April 23, but Rainbow Williams’s world ended days before that. The mass hysteria caused by the impending apocalypse claimed everything she’d ever loved. Her family. Her city. Her will to live. Until she met him. Wes Parker didn’t have anything left for the apocalypse to take…he’d already lost it all by the time he was nine-years-old. His family. His home. His hope of ever being loved. Until he met her. Brought together by fate and bound by a love that would last lifetimes, Rain and Wes were prepared to die together on April 23. They were not prepared for what would happen on April 24.

Praying for Rain was one of my favorite books of 2019, so I have been DYING to read more to see what would happen next after that ending. I was so in love with the romance between Wes and Rain as the end of the world approached and I couldn't wait to get more of them in this book. Page one begins literally right where book one left off. We are dropped right into the action, but that action quickly declined until the story kind of went stagnant for a little bit. When a certain thing happen in this book, we get Rain moping around for a good 40% of the novel. I loved the nonstop action and the angsty romance in book one. We didn't get enough of that in this book, but I definitely have a feeling we'll go right back to that in book three based on how this book ended. What I did enjoy, though, was watching Rain survive in a whole new situation and finally dealing with the emotional trauma from book one. Our main characters were thrown into an entirely new situation and they had to figure out how to survive while still recovering from everything they experienced from the first book. I still loved Wes so much in this book and cannot wait to see how things wrap up in the final book!