Book Review: Something in the Way by Jessica Hawkins 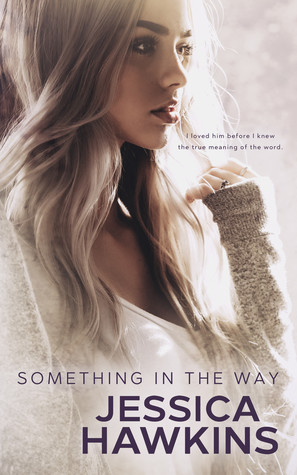 It was a hot summer day when I met him on the construction site next to my parents’ house. Under the sweat and dirt, Manning Sutter was as handsome as the sun was bright. He was older, darker, experienced. I wore a smiley-face t-shirt and had never even been kissed. Yet we saw something in each other that would link us in ways that couldn’t be broken...no matter how hard we tried.

I loved Manning before I knew the meaning of the word. I was too young, he said. I would wait. Through all the carefully-chosen words hiding what we knew to be true, through his struggle to keep me innocent, and through infinitely-starry nights—I would wait. But I’d learn that life isn’t always fair. That no matter how much you achieve, none of it matters if you suffer the heartbreak that comes with falling for someone you can never have. Because even though I saw Manning first, that didn’t matter. My older sister saw him next.

Talk about FRUSTRATING. I had super high expectations going into this book because of the rave reviews I've heard from friends and online. I was most wary about going in with such a big age gap between the characters, but little did I know that would be the least of the problems...

Lake has always done what her dad's expected her to do. She's taking classes this summer while making her way through her required reading so that she can get into the college they've always dreamed of her of going to. When she meets Manning working at the construction site next to her house, Lake starts feeling a connection with a man that she's never felt before. So when her sister has her sights set on Manning and Manning doesn't push them away, Lake doesn't know what to do with her feelings or her changing outlook on her own life.

The moment I finished this book, I had so many emotions inside of me and I NEEDED to get them out. I ranted to my sister and anyone on Instagram who had told me they had read this book. And by rant, I mean flesh out how exactly I felt about this book. Obviously there is an age difference between Lake and Manning, so there's going to be a ton of angst in their relationship. It took awhile for me to warm up to Lake's character because of how naive and innocent she was portrayed in the beginning. To me, she read more as a 12-year-old instead of a 16-year-old. As the book progressed, though, she matured so much more and finally decided to push the boundaries when it came to what she wanted. I enjoyed watching her grow and question things she was feeling and what was right and wrong when it came to Manning.

The thing that really had me struggling in my emotions was Lake's older sister, Tiffany. Tiffany was not a likable character. To me, she had absolutely ZERO redeeming qualities and I hated her from the beginning to the end. So to me, it was super frustrating how much attention Manning gave to her because he was trying to deny how much he was feeling for a girl so much younger than him (Lake). I hated how that ended up toying with Lake's emotions. I mean, I get it, and that's why I gave this book five stars. While it made me so mad and frustrated, it was something that had to happen and was really a logical way for Manning to cope with his confused, forbidden feelings for Lake.

Overall, this book gave me so many feelings and any book that does that is definitely a well written book. While I was so mad and frustrated with characters at times, that ending had me all over the place and needing to pick up book two. Yes, it's a cliff-hanger. Yes, you're going to want to throw this book against a wall and pick up book two immediately. BUT IT'S SO WORTH IT.