Book Review: Fight to the Finish by Jeanette Murray

Fight to the Finish (First to Fight #3) 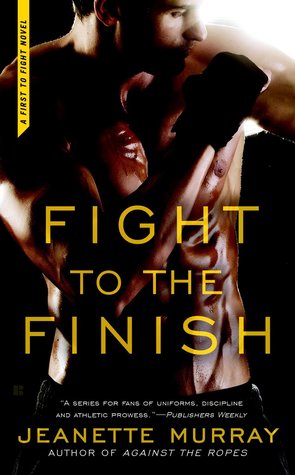 Kara is a single mom working hard to keep life running smoothly for herself and her son, but a custody battle is wearing her down. When her friend suggests asking a JAG officer for some unofficial advice, Kara agrees—and soon finds herself officially head over heels...As a Judge Advocate, Graham has seen his share of nasty custody disputes—and he plans on keeping his distance from this one. But this purposeful, passionate woman has a way of drawing him ever closer to the edge. And when Kara’s ex starts to throw his weight around, Graham will have to choose between toeing the line or stepping into the ring…

If you know me, you know I love my sports romances. There's just something about a man in a uniform! But I need both action and romance to love a sports romance and this one just didn't make the cut. As a single mom, Kara is doing everything in her power to raise her son and provide a good life for him. Working as a yoga instructor and running a blog about her son's allergies, Kara is one busy woman. What she doesn't have time for is the irresistible Graham, a fighter for the marines. Graham knows that Kara is the one for him, but can he convince her that he's the one for her, too? I read the previous book in this series (book number two) and found the romance mediocre and the fighting part definitely lacking. I was hoping for more romance and action in this one, but unfortunately it fell just as flat for me as the previous book. I didn't really see any development between Kara and Graham because Graham was already head over heels for Kara from the start of the novel. I felt like Kara's reasoning for not being with Graham was a little cliche as a single mom and I wanted something more unique. As for the heat in the romance, I found myself more bored than not with Graham and Kara. Of course, the whole mystery behind who was vandalizing the gym was carried into this book and I didn't really care for it. It seemed kind of obvious who was behind it and I felt like it was just something to be added to the story. In the end, Jeanette Murray has yet to impress me. While the potential is there, I never find myself caring for the characters and really immersing myself into their stories. When looking for your next intense sports romance, you should skip over this series.