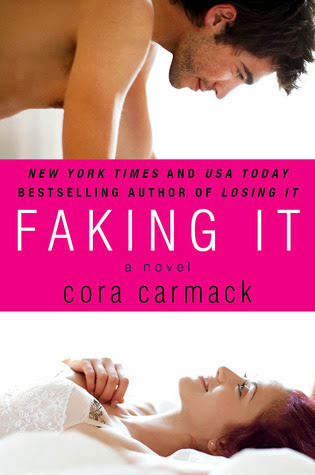 Summary: Mackenzie “Max” Miller has a problem. Her parents have arrived in town for a surprise visit, and if they see her dyed hair, tattoos, and piercings, they just might disown her. Even worse, they’re expecting to meet a nice, wholesome boyfriend, not a guy named Mace who has a neck tattoo and plays in a band. All her lies are about to come crashing down around her, but then she meets Cade.
Cade moved to Philadelphia to act and to leave his problems behind in Texas. So far though, he’s kept the problems and had very little opportunity to take the stage. When Max approaches him in a coffee shop with a crazy request to pretend to be her boyfriend, he agrees to play the part. But when Cade plays the role a little too well, they’re forced to keep the ruse going. And the more they fake the relationship, the more real it begins to feel.

Review: I fell in love with Cora Carmack's writing in Losing It, so when I had the chance to review her new release Faking It, I knew I had to read it ASAP. And just look at that cover! I knew just looking at this one that Faking It was going to be fantastic New Adult romance.
Cade has never gotten over Bliss, despite the fact that she's now in a serious relationship with a dreamy British guy who was her professor the year before. No matter how hard he tries, Cade can't get rid of his feelings and heartbreak. But one look at Max and all thoughts of Bliss fly out the window. Max is everything Cade isn't; she's rebellious and not afraid to speak her mind, not to mention her dyed hair, tattoos and piercings. Cade, on the other hand, is Mr. Perfect, always there when you need him. But when their two worlds collide and Max needs Cade's help to convince her parents that her life as a musician is the right path for her, Cade is completely captured by her passion and resilient attitude. Can Cade really figure out what's beneath the hard girl exterior, and can Max be the answer for Cade finally finding someone who just might like him too?I wasn't sure what I had thought of Cade in Losing It, but boy do I love him in this book. Cade is just so sweet and handsome and gosh darn perfect. Okay, so we learn that he's got problems of his own with letting people go and everything, but he's perfect to me! And I love how he falls for someone so not like him, which is Max. Max is such a dynamic character and I really loved how there were so many layers to her character that Cade tried to peel back as they got to know each other more and more. What was best about this book, though, was how not perfect their relationship was. Cade and Max have so many ups and downs from the moment that they meet, which makes the story so intriguing and interesting. You never knew what would set one of them off or where they would be in the next chapter. I was definitely on the edge of my seat with this one. And talk about chemistry! Cade and Max are so wrong, yet so right for each other. It's perfect!If you're a new adult fan, you definitely have to pick up Cora Carmack's books! Losing It was awesome and Faking It is even better! And in this one you get alternating points of view with each chapter (switching between Max and Cade), which means you get so much more from each of the characters and their stories. So go out and pick this one up when it comes out. I promise, you're going to love it!

Posted by Jessica (Peace Love Books) at 3:40 AM