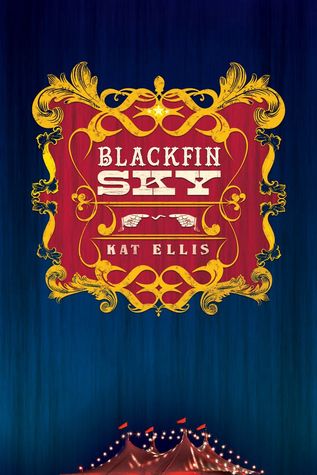 Summary: When Sky falls from Blackfin Pier and drowns on her sixteenth birthday, the whole town goes into mourning – until she shows up three months later like nothing happened.
Unravelling the mystery of those missing months takes Sky to the burned-out circus in the woods, where whispers of murder and kidnapping begin to reveal the town’s secrets. But Sky’s not the only one digging up the past – the old mime from the circus knows what happened to her, and he has more than one reason for keeping quiet about it.


Review: Right off the bat, I knew that Blackfin Sky was going to be a creepy book that held a lot of secrets. I was pleasantly surprised how much the story really drew me in and kept my attention until the very end with all of the secrecy and lies.
On Sky's 16th birthday, she falls off the Blackfin pier and dies. Too bad she doesn't remember dying. Three months after her "death," Sky walks back into her high school as if it's another day, and to her it is. But when she learns that people have thought she's been dead, especially after they buried her and held a funeral, Sky has no idea what happened to her. Sky digs deeper into the town she's been living in for the past 16 years and discovers secrets behind the forbidden woods that could reveal the town's real history and uncover what really happened to Sky after she died. At the very beginning of the novel, Sky discovers that she's supposedly been dead for the past three months, even though she remembers those three months as her just living her ordinary life in Blackfin. That being said, the town Sky lives in is definitely one of those creepy towns that you know holds a ton of secrets. The only problem is, we have no idea what those secrets are and neither does Sky. Sky starts to realize that things have always been strange in Blackfin, she's just never noticed it before. Things definitely get scary as Sky uncovers the burnt down circus in the woods and meets even more mysterious people that know more about her than she even knew herself. Trying to keep all of the facts and secrets about Sky and Blackfin straight became confusing at times because there was so much history to the town, but once everything fell together at the end, the story and characters were much easier to understand. As always, I loved the romance we got in the novel. As great and adorable as the romance was, though, I wanted more from Sky's relationships with her "best friends" in the novel. Sure, Sky has a huge crush on her best friend's brother, but we didn't really get to see her relationship with her best friend that much. I mean, if I was going through as much as Sky was, I would definitely call my best friends for help, not some random guy I had just met or people who really freak me out, which is what Sky ended up doing. Cam wasn't really present throughout the novel and I wish we could see their close relationship balanced with Sky's relationship with Sean. We did get more of Sky and Bo's relationship, but I think there could have been a lot more best friend moments than we got. In the end, Blackfin Sky was a creepy story about a strange town with even stranger people. I really enjoyed Sky's character and how real she was with everything going on around her. The mystery behind who Sky really was and what was happening in the small town of Blackfin provided an intriguing story that brought in some pretty unique characters.

Giveaway
One lucky winner will receive a copy of Blackfin Sky by Kat Ellis! Just fill out the rafflecopter below! Ends 9/5 ***US ONLY***

a Rafflecopter giveaway
Posted by Jessica (Peace Love Books) at 9:46 AM