Book Review: Be My Hero by Linda Kage 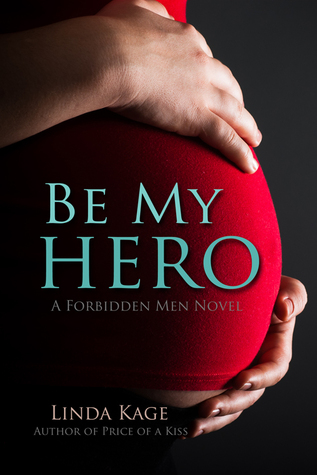 Once upon a time, there was this pampered rich girl who was kind of full of herself. She really only cared about appearances and hiding all her dark, ugly secrets under the guise of an opinionated snob. But then Eva Mercer got pregnant, shot by a psycho, and kicked out of the only home she knew. Now she’s broke, unemployed, and has to start anew with a newborn to raise. But how?On the other side of town, sexy, tattooed orphan, Patrick Ryan, can’t get a break. He’s out on parole for defending the last damsel in distress while trying to help her support her child, but all he wants is to find his one true love. He knows this woman by scent, smile, and laugh, but he’s never actually met her. He doesn’t even know her name. He just knows she’s the key to fixing everything.One kind of hero can save you from physical harm. Another can rescue you from a different kind of doom. To reach their dreams, Eva and Pick can save each other. But first, they must open their hearts and learn how to trust.

This is book three in this series and I am seriously obsessed. I am so happy there are nine books total because I need more of these forbidden men! I had high expectations for Pick and his story and I was not disappointed! Eva Mercer was always known as the pretty, spoiled rich girl. Now she's pregnant and living with her cousin and her cousin's boyfriend. Eva wants nothing to do with the father or her own parents, so she's on her own for the first time in her life. Patrick Ryan, aka Pick, has known who he is destined to be with since he was young and he's been waiting for her to show up through the ups and downs, and more downs, of his life. The moment Eva meets Pick, Pick shows Eva that there's a hero to save her and she doesn't ever have to go through anything alone. When I heard that I would love Pick, I didn't expect to love him nearly as much as I did in this book. Pick is such a selfless guy, even though he has gone through a really rough childhood and is trying to keep those he loves safe. And this man as a father? Yum. Seriously, Pick is the cutest dad (well, father figure) ever and I loved how attached he became to the children of this book. And talk about slow burn romance! Pick and Eva had a serious physical and emotional connection when they first met, but both of them had certain circumstances the prevented them from acting on those feelings. I was DYING for these two to get together. You knew that they cared about each other so much and just wanted everything to stop working against them. Also, this book takes place about halfway through book two's timeline, which I absolutely loved. I knew how other characters' stories would turn out and loved watching it happen from another point of view while watching Pick and Eva's story progressing. We also get more Mason Lowe (from book one), which definitely put a smile on my face. Needless to say, every fan of this series HAS to read Pick's story. And if you haven't picked up this series yet, you have to! You're in for an addicting series with utterly lovable men.