Blog Tour + Review: Say No to the Duke by Eloisa James

Say No to the Duke (The Wildes of Lindow Castle #4) 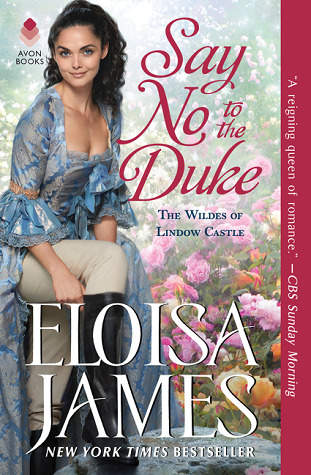 One little wager will determine their fate—a daring escape or falling into temptation with a rakish lord.

Lady Betsy Wilde’s first season was triumphant by any measure, and a duke has proposed—but before marriage, she longs for one last adventure.

No gentleman would agree to her scandalous plan—but Lord Jeremy Roden is no gentleman. He offers a wager. If she wins a billiards game, he’ll provide the breeches.

If he wins…she is his, for one wild night.

But what happens when Jeremy realizes that one night will never be enough? In the most important battle of his life, he’ll have to convince Betsy to say no to the duke.

Every time I start a historical romance review, I mention how I don't read this genre enough. Because every time I read one, I'm like, WHY AM I NOT READING MORE OF THESE!? That reaction was no different the entire time I was reading this newest release from Eloisa James!

Lady Betsy Wilde is determined to never be like her mother, which means being the perfect lady that all of the gentlemen want to wed. Well into her first season, Betsy has had plenty of proposals and finds delight in declining each one. Until a future Duke asks for her hand. Betsy knows he would make the perfect husband, but when Lord Jeremy is constantly teasing and testing her, Betsy isn't so sure she'd be happy with the Duke...

When I started this book, I absolutely loved Betsy's character. She is really aware of what people in public think of her, so she puts on this good girl facade that makes all of the gentlemen want to marry her. That's why I loved how Jeremy totally saw through her persona and brought out the rebel that Betsy really was. Their relationship was soooo cute and kind of slow burn, which I loved. It was fun watching Betsy not wanting to notice Jeremy in that way but not being able to ignore it.

While I really wish this was a five star read, the pacing of this book dropped it a star for me. The whole premise was that Betsy and Jeremy made a bet and Betsy would be able to dress as a man or Jeremy would get one night with her. Well, one of them wins the bet and it takes almost the entire novel for the bet to actually come to fruition. It seemed to drag and I wish it happened earlier and the rest of the book was them continuing to dance around each other and interact in society.

Eloisa James is one of the queens of the historical romance genre and I will read everything she has to read. This was my first of the series (I know, it's book number 4, but I'm a rebel) and now I am dying to pick up the first three of this series. There is so much familial love and such an expansive group of characters that I'm dying to get even more of them!

They moved toward each other as if they were following the steps of a very slow, very grand country
dance. One that was danced by kings and queens and countryfolk alike.

When they were beside each other, she squared her shoulders and met his eyes. “I decided to come
to you. I hope that is all right.”

“I do believe that you are the bravest woman I’ve ever met,” he replied.

He couldn’t have said anything better; Betsy felt herself begin to glow. “I haven’t been brave to this
point, but I have made up my mind to change. I outlawed being nervous, but now I need to outlaw being afraid.” She hesitated. “I have chosen courage, and now I choose happiness.”

“I love you as you are,” he whispered, and then his mouth came down on hers.

Her breath caught in her throat because their tongues met as if they kissed every day, every night. He
tasted right, which sent a shiver through her whole body, and pushed her against him gently, the way
a pebble might roll up a beach when the tide comes in.

One doesn’t fight the tide.

Eloisa James is a USA Today and New York Times bestselling author and professor of English literature, who lives with her family in New York, but can sometimes be found in Paris or Italy. She is the mother of two and, in a particularly delicious irony for a romance writer, is married to a genuine Italian knight. Visit her at www.eloisajames.com.

Posted by Jessica (Peace Love Books) at 9:56 AM