Book Review: Against the Ropes by Jeanette Murray

Against the Ropes (First to Fight #2) 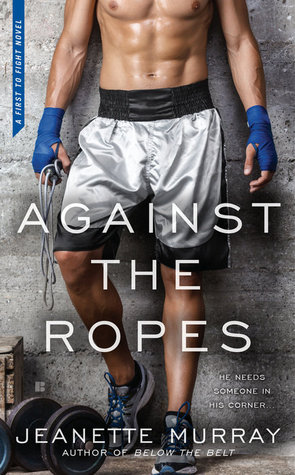 As a troubled teen, Gregory Higgs channeled his energy into boxing instead of breaking the law. The ring gave him purpose and something to strive for. So did the Marines. Combining the two seemed like a natural fit.Another natural fit? Reagan Robilard, the sweet athlete liaison who keeps all the fighters out of trouble and manages their PR—a job that gets more challenging when someone digs up the truth about Greg’s not-so-shiny past after equipment is vandalized at the gym.Even if it wasn’t her job, Reagan can’t let Greg take the fall. Because passion doesn’t pull any punches when it comes to matters of the heart…

It's no secret that I love sports romances. After seeing Creed over winter break, I knew that I was definitely in the mood for another fighter story, so I turned to Jeanette Murray's most recent release to quench my thirst. Reagan Robilard is just thankful she has a job when she's hired as the athlete liaison for the Marines boxing team. But when someone starts sabotaging the team, she finds her job becoming harder and harder. Gregory Higgs found a purpose with the Marines and, having fought his whole life, is a natural in the ring. Greg has his eyes on Reagan in her sexy heels and can-do attitude, but Reagan doesn't want to blow the job she worked so hard for. As Greg coerces her into spending more time together, they realize they have much more in common than they thought, along with a whole lot of chemistry that becomes harder to ignore…I feel like the more sports romances I read, the less sports are actually in them. I loved that Greg was a boxer, but there was barely any actual fighting in the novel. When Greg was fighting, Reagan was too scared to see him get hurt so she left. So no fighting actually even happened! Where is the suspense and utter hotness of a male athlete in his element?? There was so much talk, but not enough action for me. While Greg and Reagan were cute, I didn't feel the normal pull towards their story. I was interested, but not intrigued. Greg was super sweet to Reagan and I liked how he tricked her into spending more time with them and how he was the one pursuing her. The story did have it's adorable side, but I was left wanting a little more from them. As far as sports romance goes, it was lacking on both the intensity of the sports and the passion of the romance. While it wasn't horrible, it wasn't fantastic. I might try out some more from Jeanette Murray, but if it's your first time reading her, I'd say start with something else.